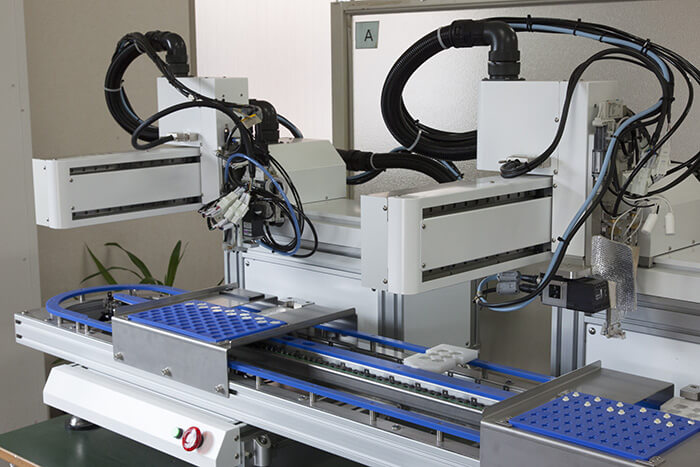 Atom Seimitsu Co., Ltd., introduces AT9000 Series of linked tabletop robots. It is a revolutionary system that automatizes manufacturing processes that were previously only done by hand, allowing customers to achieve consistent quality of output. These robots are customized to perform tasks like soldering and coating which could be used autonomously or linked to other units. The units offer applications for detailed work performed in diverse industries such as automobile, semiconductor, liquid crystal display, and food.

Atom provides a range of solutions for factory automation. It is one of the fast becoming industry leader in Japan and overseas due to its comprehensive knowledge of machines. They also have a stellar reputation for their careful maintenance and services they provide for their products.

Tabletop robots have been extensively used for soldering circuit boards. Traditional production line requires installation of multiple robots to work on the different elements, together with human labor of transporting boards from a robot to the next robot. When moving these board to the next production process, from soldering to coating for example, the end-users are responsible to learn new programming languages and controls for each unit.

AT9000 Series enables automatized transportation of goods between robots. Up to ten robots can be linked together in this system, which allows the users to create their automated production line without installing large-scale equipment. Costs can be constrained to as much as one tenth of the traditional outlay, with solutions that would involve large machines.

President of Atom, Mr. Yasutake Ichinose comments, “AT9000 Series achieves consistent quality of output. It is possible to automatize the minor, interstitial processes previously done by hand, which could also be linked together to create actual production lines. It is a simple solution that allows our customers to reduce cost.”

Solution for Soldering to Cake Decorating

AT 9000 Series is an universal robot type with enhanced customizability, allowing a single unit to cover a wide range of tasks.  Applications usually only transport around 2-3 kg at a time. AT 9000 Series supports up to 10 kg, enabling greater freedom in transportation processes. It could be used in testing smartphone panels, applying paint and coatings, medical dispensing, and coating and soldering of automobiles, semiconductors, and circuit boards. With a range of other applications conceivable, Ichinose says, “these machines can solder circuit boards, but I can also see them easily accomplishing tasks like fine cake decorations.”

Stroke and fidelity could also be customized. Customers can begin using one AT 9000 series and add more units to the chain later on, as the need arises. Ichinose explains, “this allows companies to order robots accordingly to their production needs, and can help smaller businesses and manufacturing start-ups to save on initial investments.” Programming is initially handled by an engineer from Atom. Trainings are later performed to customers to program these robots themselves.

Future of the Tabletop Robotics Market

AT 9000 series were developed after a year and a half of intensive testing and development. The company continuously test and investigate new technology to create innovative products and solutions. Atom is also always willing to listen to their customers. Real feedbacks from their end-users helps them develop a better interlink tabletop robots.

Tabletop robot format is gaining ground worldwide. There is currently a high demand in comparative small-scale production processes, as they allow for maximizing possibilities with a minimum investment. 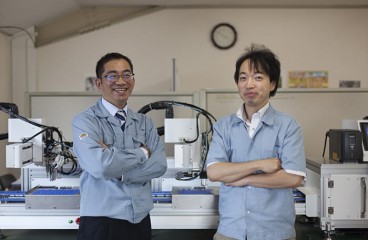