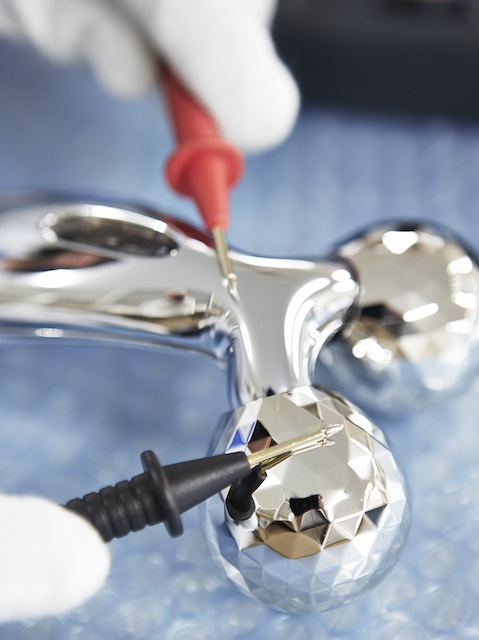 Introducing Beauty and Health Equipment to the World

Japanese startup company, MTG Co. Ltd., is growing rapidly as it continues to develop innovative products in the field of beauty and health equipment. ReFa have already seen cumulative sales of five million units and has become a must-have item for Japanese women. Wearable training gear, SIXPAD, wearable training gear for a stronger, more beautiful body, had also became one of the popular hits for MTG.

How did MTG managed to grow in such a short time. Let’s explore their success story. 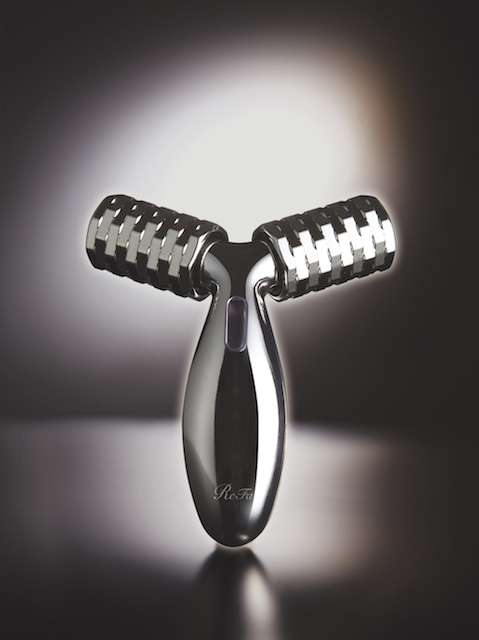 ReFa is a platinum 360° multi-angular roller that fits over every detail of your face and body. It instantly awakens the beauty of your features, making users feel like they are at an esthetic salon.

ReFa’s unique design also adds to the popularity it gained.  The shape is scientifically proven to have cosmetic effects, of course, but moreover, it has been designed to be like a piece of beautiful art work, more than a device.

The first generation ReFa product was developed based on the esthetic techniques used to tighten the face and body. The idea was to deliver beauty not only at salons which are usually highly priced and hard to go on regular basis, but at home. ReFa’s rollers can be used to lift up the face line. It could also be used on the neck, upper arm, waistline, and hiplines to allow skin to achieve youthful, firm looking, beautiful skin.

With a three-dimensional design, the V-shaped rollers easily fit the contours of the skin. Rolling it up without using much pressure in both directions along the lines of your face and body, you could achieve an ideal fit and balance of applied pressure. A solar panel is also built-in to capture light and generate microcurrent (low-level current) which circulates your skin. This allows users to easily receive the same treatment at home on a daily basis with out having to go to a beauty salon. This is one of the reason why ReFa is loved by many worldwide.

ReFa was first introduced in Japan in 2009 and spread quickly around women via word of mouth, and sales steadily expanded. People were not only purchasing it for home-care devices, even beauty salons were purchasing ReFa to use it at their shops. MTG immediately became big in Japan’s beauty industry and is now widely spread across the world. Celebrities such as models and actresses were also giving reviews on the ReFa’s benefits, which subsequently led to an explosion in growth. ReFa has achieved  a cumulative sales of five million units in year 2016.

President of MTG, Tsuyoshi Matsushita, shared the story. “ReFa’s beauty product line is extremely effective, just as our research had shown. I’m certain that the more you use it,  you’ll understand the benefits. However, it is more than just an outstanding beauty device. It’s almost like an interior, the design itself is beautiful.”

Platinum coating helps prevent deterioration and discoloration. MTG’s motto of monozukuri (craftsmanship) is as not to compromise, even in areas that do not directly affect the effect of the device, at that is greatly reflected on the beautiful appearance of ReFa.

MTG introduced ReFa CLEAR in summer 2016. It was the first 3D sound-wave face-washing brush. With 3D sonic motion and ion cleansing, as well as a Kumano brush head (one of Japan’s traditional craft items), ReFa CLEAR featured the “World’s First* 3D Sonic Ion Technology.” *According to research by the JACTA research department in August 2016. 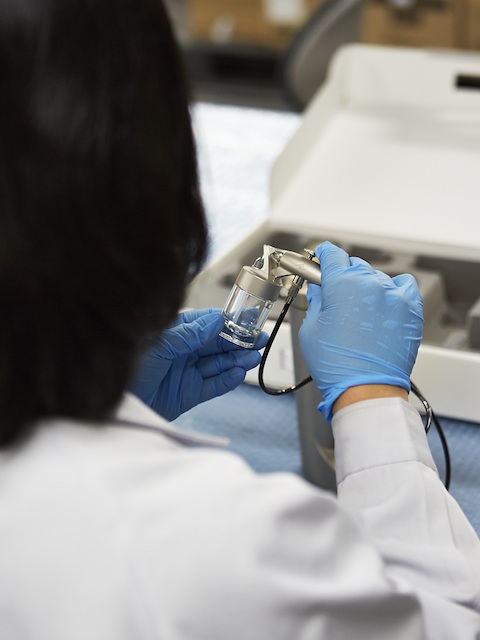 Research on skin including pores led to the development of  ReFa CLEAR with 3D sonic motion technology. ReFa CLEAR utilizes minute vibrations that moves up and down, left and to the right, enabling thorough cleansing of the contours. Vibrations removes grime and ion cleansing pushes up makeup and dirt that are remained in the pores. Kumano brush, handmade by Japanese artisans using traditional techniques passed down over several hundred years, creates differences in the lengths of the hair tips, spaced at intervals of 0.5mm. This brush enables cleansing of both, the surface of the skin and the pores. The tip of each hair has been refined to a thickness of just 0.1mm, thinner than human hair, it can scrape out any dirt remaining in the pores.

Fusion of cutting-edge technology and traditional crafts, or harmony between technology and human sensitivity, is one of the features of MTG’s products.

SIXPAD, wearable training gear developed by MTG, is another popular product which became famous after an advertisement with Cristiano Ronaldo. Ronaldo appreared on screen wearing SIXPAD, and has sold more than five million units, just after 11 months since its launch in 2015. This revolutionary wearable training gear allows the user to gain the benefits of muscle training simply by applying SIXPAD on their abdomen or arms with a training program of 23 minutes.

MTG focused on electrical muscle stimulation (EMS) technology. MTG collaborated with Dr. Toshio Moritani, Emeritus Professor at Kyoto University, who has been a driving authority in the field of sports science, doing research on the training effects of EMS for over 40 years. They examined Cristiano Ronaldo’s training method and discovered that the 20 Hz frequency is the most effective in training. Based on this theory, MTG introduced CMM Pulse core technology.

MTG’s product development flow is quite unique as it starts from thinking of the design. Developers then take on the challenge of maximizing the effect and functionality of the product in the limited space of its prototype.

ReFa’s development started be designing the shape, to provide the same treatment provided at beauty salons. After conducting surveys and research, they found our the V shape, opening the thumb and forefinger was often used to provide treatment by estheticians.

Then the next question was “Why a V shape?”

Our body and skin is much sensitive and feel  more stimuli than what we are aware of. MTG examined and positioned the angle of the V-shaped to 1/100mm increments. President Matsushita saids “All of our products undergo strict tests, and they are not ready for the marketplace until they outperform rival products in every way.” 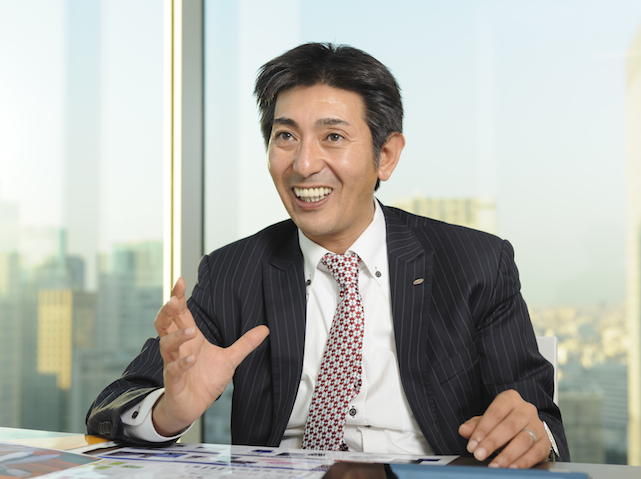 Development of beauty devices usually take about 12 to 18 months of research. However, MTG undergoes years of research and examination. ReFa CLEAR took a startling five years. Extraordinary amount of time is consumed to achieve the best effect. For example, the Kumano brush. The effect on skin will dramatically change if the density or the angle of the brush was different, even if it was a slight difference. Over the course of development, one developer spent two years simply studying the hair brush.

Koji Nagatomo, director of MTG’s Planning and Development Division, says “Our department is divided into planning and development, and production. Planning and development division scientifically evaluates the ideas and questions bought up by the President. Matsushita is very strict. To be honest, there were many areas where I wanted to compromise but Matsushita will ask for the 100% outcome and never compromised for the effect and even for the appearance of the product. I’ve been asked over and over to retest and redevelop the product.”

Cutting-edge Technology to the World

Japan’s heritage in arts and crafts has added to MTG’s product development. President Matsushita says “There are many crafts work which are still hidden from the world, yet to be discovered. Out long history of artisans has cultivated a rich craft industry. The manufacturing industry, however, has a lot of pride and is resistant to potentially helpful outside influences. Its efforts often result in work that is purely for self-satisfaction. It is the role of MTG, therefore, not only to incubate these precious craft cultures but also market them as brands that can meet the demands of today’s consumers.”

President Matsushita was born and raised on the Goto Islands, off the west coast of Japan’s most southern main island of Kyushu. People there simply enjoyed the beauty of nature and respected the neighbors and locals. He then moved to Osaka for work and established MTG as a venture business, but never forgot his nature and local culture back home. His motivation behind his business was a strong desire to raise awareness of the beauty of these various cultures and keep them relevant in the face of a rapidly aging population and rural economic decline.

Continuing to Hunt for Treasure

President Matsushita isn’t against diversification. The company is examining and researching for better development with local materials and crafts.

“At MTG, we try to come up with ideas that nobody has ever had before. And we do not simply incubate these materials and crafts, we turn them into brands. It is vital to define the concept of brand; effects and results; and our work at MTG.”

Thinking of ideas for new products, and pursuing both beauty and functionality, President Matsushita became to resemble Steve Jobs, who brought forth revolutionary items one after another, from Mac to iPhones. 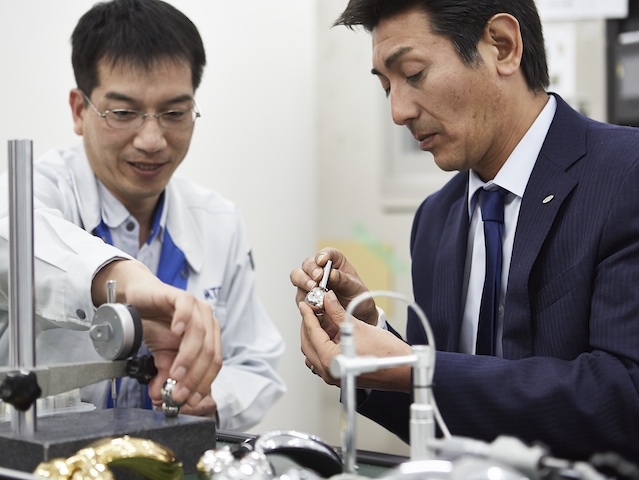 President Matsushita said: ” There is a huge responsibility when one launches a product in the market, not only in the field of beauty. I take on the burden of that responsibility because I want to spread the beauty of our culture which are mostly hidden locally in each region. I want to connect cutting-edge technology with these regional cultures and develop the best product to deliver the best outcome, satisfaction all users worldwide.”

MTG succeeded in satisfying Japanese users. And now, MTG has gone global and selling their products in Asia and Europe. They are also looking at expand their market to China. They also aim at expanding their market world wide, including North America by year 2020. While going aggressive to grow globally, they are also focusing on developing new products. MTG is one of the leading companies in Japan and excited to see what lies ahead in their future. 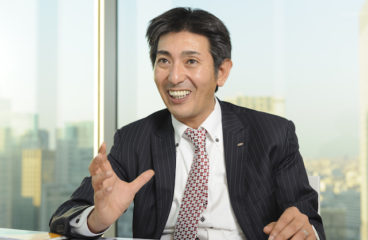