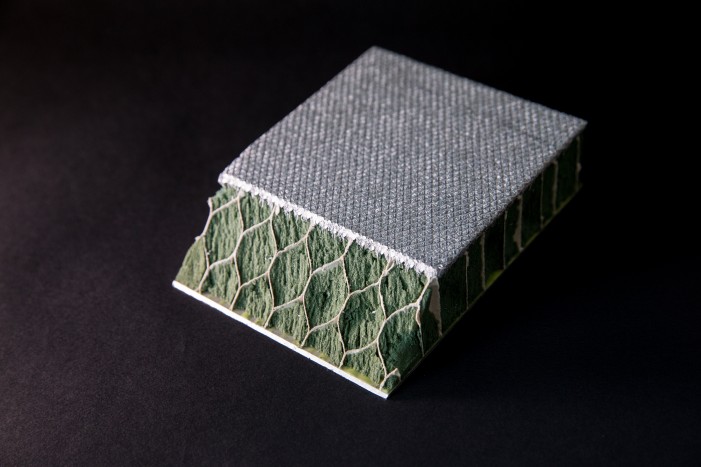 “HITORISHIZUKA” developed by Shizuka Inc. is a completely new soundproofing material used for the prevention of industrial/machinery noise. It cuts the noise with a thin and light material and absorbs the noise with a hard material. “HITORISHIZUKA” overturned the conventional wisdom that thick and heavy materials are for cutting the noise and soft materials are for absorbing the noise. Moreover, it covers low-frequency noise unable to insulate with common soundproofing materials and is easily processed according to the sound source. This unique soundproofing panel is now gathering lots of attention from domestic factory makers and highways to construction sites as a noise countermeasure.

What’s the secret of this extremely high soundproof effect?

First, the secret lies in the sound-absorbing side directly receiving the sound source, it is the same as those wall surfaces with identical holes frequently seen in Japanese music rooms. The sound becomes weaker as it passes through the small holes and the lower aperture ratio becomes, the better the sound resonates. Thinking in terms of this principle, just this sound-absorbing side alone is making the side capable of absorbing a considerable amount of sound. Besides, it has rust prevention, corrosion resistance and extremely high durability as it is high purify aluminum material.

Next is the sound-absorbing layer in the middle, this is the utmost significance of “HITORISHIZUKA”. While conventional soundproofing materials use fiberglass for this part, “HITORISHIZUKA” has focused on resin foam. The resin foam is mainly used as a water absorbing sponge by horticulturists.

Shizuka adjusts the size of air bubbles in the resin foam during production process. We have found an optimal ratio of expansion based on a data obtained by its original extensive experiments. This refined-scale ratio of foam density has enabled the layer to cover low frequency noise that was impossible with the conventional fiberglass. What’s more, by filling a honeycomb core with resin foam, it secures high strength and high sound-absorbing performance. The sound is insulated by inserting this absorbing layer between the coated aluminum plates with no ventilation holes.

The structure clearly differentiates “HITORISHIZUKA” from the conventional sound-absorbing material, making it unable to cut the noise with a thin and light material and absorbs the noise with a hard material. Literally, it is an epoch-making soundproofing panel.

The feature of “HITORISHIZUKA” is not only high soundproof effect, but also its “lightness”. The conventional method which insulates the sound with thickness / weight of the panel requires large-scale of works, therefore costing a lot of expense and time. However, “Esprit Life” is only 1000×1000mm / panel, weights only 8kg. Other Panels with the same standard are customizable according to its usage.

The panel size is available in several sizes. To prevent the noise of large machinery in the factory, for example, select size and number of panels according to the size of machinery and surround the machinery with these panels. It can also be used in common house with the same easiness as DIY.

The customizing method has been applied to the “sound-absorbing device for unexpected noise” (noise-prevention technique for jointed parts of bridge: East Nippon Expressway Company Limited, NEXCO East Nippon engineering Company Limited) which is used to reduce the unexpected noise made by vehicles passing over jointed parts of bridges, it also contributed to win the 2010 Environmental Award of Japan Society of Civil Engineers.

The technology is demonstrated mainly in Germany and towards the world

In Japan, “HITORISHIZUKA” is currently used by Japan’s leading makers including Toyota, Hitachi, Sharp and Cannon as a countermeasure for machinery noise in their own factory.
It goes without saying that “HITORISHIZUKA” provides a noise countermeasure in consideration for areas around factory, there are also many companies using it for safety/ health and health care purposes such as to protect their employee working in the factory from having a hearing loss.

In addition to those mentioned above, it is used in various ways. Setting up soundproofing walls around in-site clean rooms or the entire factory is possible, too. And, it provides a noise countermeasure for phone and server noise in an office, for noise from next rooms in a hospital and a nursing home. Also, it is suited for research facilities that require a constant environment such as humidity and temperature. Other than that, it supports audio facilities, conventional home and apartments.

It could be said that noise is a common global issue. “The market must not be only domestic”. Such view has generated among us as we are confident that the quality of “HITORISHIZUKA” is a world standard.
In the attempt to develop a global market, we have already started researching in various countries. Our current focus is on Germany: One of the most powerful industrialized countries.

First of all, we have a step-by-step plan, including a proposal of simple shapes such as partitions with caster while proceeding with development of a product that can be set up inside machinery.
How significantly this an epoch-making soundproofing panel will develop in the global market? 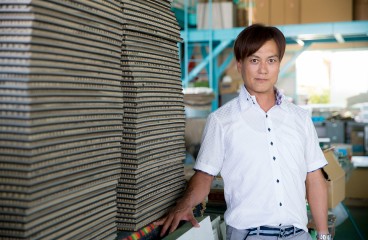