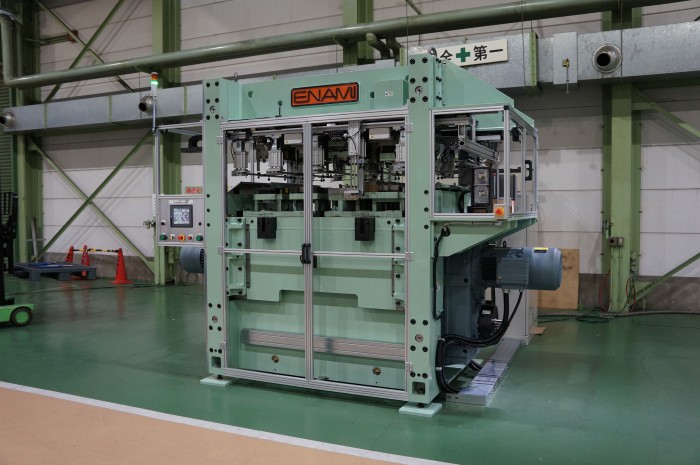 Calking technology allows the jointing of two metal sheets without welding, metal fittings, or adhesives. The technology has advanced even further and is now essential in a wide range of products for industrial equipment, electronic equipment, and home appliances. With its high strength, air tightness, and commanding manufacturing speed, Enami Seiki Mfg. Co. Ltd. ‘s machines held a 40% market share of world microwave oven production until a few years ago. Enami Seiki’s calking technology has the capability to form even coated steel sheets by press working without heating as its advantage. With high technological competence that competitors cannot imitate, Enami Seiki has been in business with all domestic home appliance manufacturers and manufactured outer frame bodies and stainless drums for automatic washing machines. The company has supported the home appliance market in Japan and is now expanding business with overseas major home appliance manufacturers.

Press Working and Jointing in One Step

Twenty-five years ago, a home appliance manufacturer requested the development of a production line for washing machine outer casings used in higher capacity washing machines. However, such development required a long period of time; consequently, we proposed changing the material used from the former resin to stainless steel instead of developing a new production line. The idea had the advantage of making the washing tub thinner, which in turn led to higher capacity and a shorter development period. At that time, stainless steel sheets had not been used for the washing tubs in machines and so Enami started development. The forming technology for a tea caddy by Enami until then used press forming, but combined with calking technology, Enami provided the world’s first stainless-steel washing tub.

Enami’s technology can handle coated steel sheets. For example, even the outer wall of a white-coated washing machine can be shaped by a press without damage and other parts can be attached. This technology is proprietary and has been developed for years.

The coated steel sheet business was started by Mr. Toshiaki, father of the company’s president, Namiaki Enami, and the founder of Enami Seiki, when he came up with an idea based on a tin can for candy. At that time, 28 years ago, an attempt was made to apply three-dimensional forming to coated sheets, which was common in the can manufacturing industry, to home appliances. Before that time, the typical process in the home appliance industry was coating after mold pressing and then welding due to concerns about damage. Flawless forming by a single press without that process was a surprise to the home appliance industry and competitors around the world.

Focusing on its own technology as the core of management, Enami Seiki is rationalizing production. Taking into account efficiency and the number of processes that can be done in a single shot with a single press, the company has driven the development of molds. The need for mold changes for products different in shape has been eliminated thanks to the mold called the Konjac Block, based on its stretchable characteristics and volume production in a single line. Even with a wide variety of products, the processes have been thoroughly cut and accelerated by reducing the number of tooling and mold changes, dramatically increasing productivity.

Furthermore, it is imperative for Japanese companies to make the production line and stockyard compact due to the limited manufacturing spaces. Press machines in Western countries are tall with the need to prepare a machine installation environment by digging a floor, but it is not necessary with the company. A major home appliance manufacturer has successfully saved space for washing machine production lines from 300 m to 15 m.

“For example, if you purchase equipment at a 100 million yen to save space, the saved space allows the building of a factory of an additional 100 million yen. Eliminating waste on the production line in the minimum space dramatically increases production efficiency, leading to an increase in business profit,” says Enami.

The company plans to broaden the market overseas in the future. It just closed a deal in Mexico last month. The company has done business in design, manufacturing, and marketing with a focus on home appliances; however, there are a myriad of application fields for the company’s technology: medical equipment, electronics, industrial equipment, and automobiles.

“We don’t simply sell molds. At the request of our customer, we fully customize the system consistently from mold design to system development of the production line. We face new challenges and it is our greatest strength.”

The best machine equipment and system are built by saving space, resulting in low cost. Looking ahead to the world, Enami states that maximizing corporate profits is his mission. His challenges never stop. The company has so far done business with major home appliance manufacturers in the domestic market and in America, Mexico, South Korea, and China. The company has a plan to broaden the market overseas in the future. 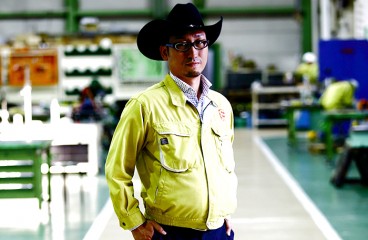