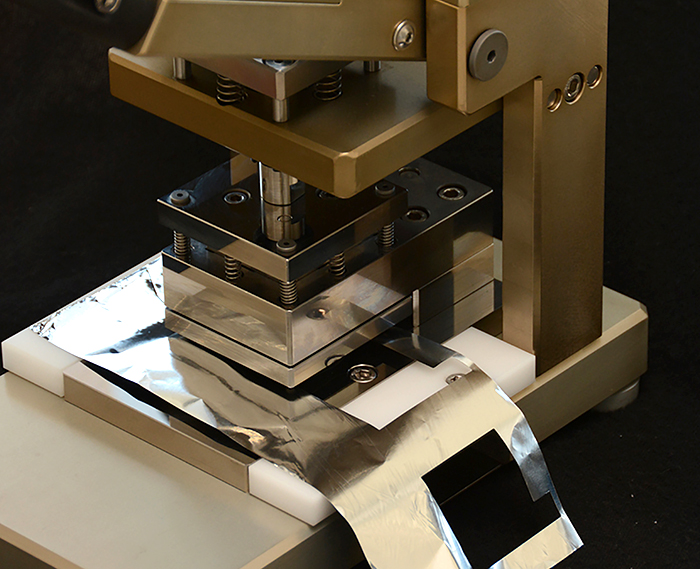 Punching through thin materials in one shot, no matter how difficult, such as multilayered thin film and metal foil—that kind of reliable technical competence is underpinned by ultra-precise grinding technology cultivated over more than 40 years since the company’s founding, technology with a parallel, right angle precision of 5/10,000 mm (0.5 μm), that is, parallel, right angle error of just 1/200 the thickness of a sheet of copy paper. A product in which the crystallization of that technical prowess can be seen is Nogamigiken’s hand held punch. Anyone would gasp in surprise at its extraordinary sharpness. The cross-section it produces with minimal burrs and deformities is clean and beautiful.
The company’s original ultra-precise punching dies, researched and developed to suit specific materials and needs, enjoy a high reputation in the world market.
If you wish to try the free stamping tests and get test reports, please send a trial material to Nogamigiken (Ibaraki plant. 1136-3 Izumi, Hitachiomiya City, Ibaraki, 319-2144 JAPAN)  Ask for NDA if necessary. Contact us for more information. 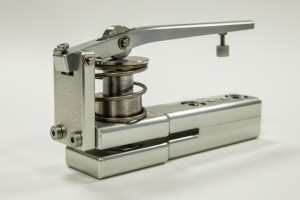 Punching through thin materials in one shot, no matter how difficult, such as multilayered thin film and metal foil that kind of reliable technical competence is underpinned by ultra-precise grinding technology cultivated over more than 40 years since the company’s founding, technology with a parallel, right angle precision of 5/10,000 mm (0.5 μm), that is, parallel, right angle error of just 1/200 the thickness of a sheet of copy paper. A product in which the crystallization of that technical prowess can be seen is Nogamigiken’s hand held punch. Anyone would gasp in surprise at its extraordinary sharpness. The cross-section it produces with minimal burrs and deformities is clean and beautiful. The company’s original ultra-precise punching dies, researched and developed to suit specific materials and needs, enjoy a high reputation in the world market.

Hand held punches made by Nogamigiken were first created in 2004 as a simple punching tool for film substrates used in LCD panels for TVs and computers. Nogamigiken’s hand held punches displayed an overwhelming difference compared to competitors products in punching special materials in which burrs and deformities occur easily, such as specialty films, glass, and aluminum. That was a reason why they captured a large share of the LCD panel industry in Japan, which was enjoying its heyday at that time.

Later, the company’s punches earned a reputation in punching electrode material for lithium-ion batteries, which is brittle and difficult to punch. In addition to battery makers, major automakers, medical device manufacturers, and companies in many other fields also use the punches, mainly for testing and prototyping new products. Furthermore, these products are often the trigger that leads to negotiation of business deals in overseas transactions. It is not too much to say that Nogamigiken s hand held punches have become the byword for ultra-precise punching dies, into which the company puts the most effort, often ending up in orders for mass productions dies. 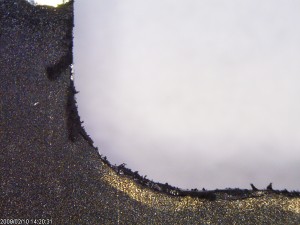 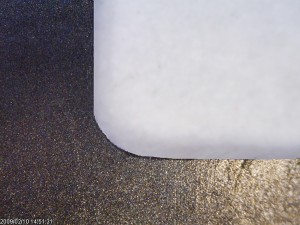 Ryota Nogami, the company’s president and CEO, says, “Different from usual punching dies that are set in a machine, our hand held punches have a very simple structure; they are small enough to fit in one hand and can punch a hole with just a squeeze. Nevertheless, they are ultra-precise dies with a clearance of 3/1,000 mm. We always bring some when going to business talks to show as a product that clearly introduces Lithium-ion battery electrode material. Our company’s technical strength.” 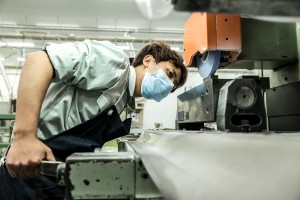 Nogamigiken s ultra-precise punching dies, including its hand held punches, exhibit exceptional performance. The foundation for that performance is world-class precision grinding technology at the level of 5/10,000 mm for right angle precision, which was established nearly 40 years ago by Ryota s father Shinryo, the company s first president and current chairman.

Shinryo Nogami worked at a small die maker in Tokyo until the latter half of the 1960s. The turning point that led to him going independent was his encounter with a manual all-purpose grinder, which was still novel at that time. Shinryo was the first to try the grinder, which had been left in a corner, because no one knew how to use it. 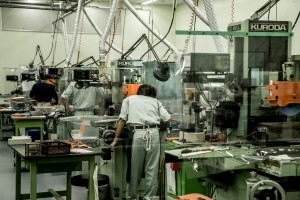 Shinryo, who was an eager learner, spent day and night practicing with the grinder. He drove the feeling of the machine into his body while honing all his senses listening to the sound of grinding materials, observing the color of the sparks as he pushed the limits of parallel, right angle precision, for which approximately 1/100 mm was considered good enough at that time.

Gradually he became known among colleagues and customers as the master of precision grinding, and not long after going independent he set the standard of 5/10,000 mm for parallel, right angle precision. This precision is still used as the standard device by major Japanese machine tool manufacturers, but it cannot be achieved even with the latest machinery.

The same as in other industries, unmanned production is making progress in the die industry nowadays with the adoption of numerous machine tools that use highly precise computer control. Even Nogamigiken now uses a convenient machine called a wire cutter. On the other hand, however, it stations about 20 craftsmen (a third of its workforce), from experienced veterans to young workers, on some 60 traditional grinders. Starting with the shaping of European-made grindstones, a great deal of time and care is put into the final finishing process, which can only be accomplished by hand.

While precision punching dies are now the company’s core products, the grinding of edged tools was traditionally its main business. In addition to this, in 1992 it started mass production of fine parts through press stamping as well as the design and production of progressive dies used in that work. 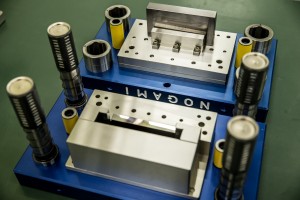 “What made it possible for us to smoothly get over the major turning point of launching a new business was the fact that we had this foundational technology inherited from the former president that enables parallel, right angle precision of 5/10,000 mm,” reflects Ryota. “It was also more than possible to apply the know how accumulated over 20 years of edged tool production to dies.”

Then, by using dies while at the same time making them, the strict perspective as a user was introduced into the production floor. The company increased the performance of its dies dramatically as it constantly made refinements. As the performance of the dies increased, the frequency of maintenance decreased and work efficiency improved. This also translated into significant cost reductions, since the production line did not need to be stopped uselessly.

Here, Ryota had major flash of insight. Dies are not merely tools; they are important weapons for generating profit

Embracing the challenge of specialty materials that are difficult to work

After raising the level of its dies by resolving issues in-house and having its competency recognized in the LCD industry, the company embraced the challenge of one specialty material after another that is difficult to work, thereby accumulating know how. In 2009, it embarked on serious R&D when it was selected for a national subsidized project.

First, it accumulated thorough data on punching film substrates for LCD panels, which was an area where it had a track record. According to a comparison test conducted by a user, burs started to appear after 300,000 shots with a competitor’s product, requiring maintenance such as regrinding. At Nogamigiken, 800,000 shots was the initial limit. But, after conducting numerous tests, including the shapes and material qualities of the edged tool, hardening methods, and coatings, the company was ultimately able to get its product to go over 7.2 million shots, which was the measurement limit. Surprisingly, the edge of the tool was still clean at that time and everyone present agreed that it could have reached 10 million shots had the experiment continued.

According to calculations by the same user, maintenance was needed 36 times per year with the competitor’s product, in contrast, the new die made by Nogamigiken needed maintenance 1.5 times per year, revealing a life span that is 24 times longer. Assuming the maintenance fee is 40,000 each time, this would result in a cost reduction of more 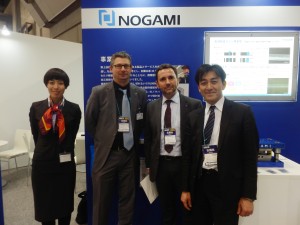 than 2 million yen per year per die, including the cost for purchasing spare dies. Nogamigiken s dies slashed maintenance costs by over 90%!

It was an instant when everyone at the production site had the real feeling that dies were indeed weapons.

Aiming to be at the top of a global niche market

For the past few years the company has been preparing to make a serious expansion into overseas markets.

“If we can get people to try our products even once,” says Ryota, “the difference will be clear. Our technical strength is recognized in Japan, which has the world s top die manufacturing, and now I want to spread that strength outside Japan.”

After being selected in 2010 as a promising exporter by an independent government agency, the company started participating in and observing exhibitions and visiting companies not only in Japan, but also in Germany, the US, and France to identify market needs by going out into the field directly numerous times. 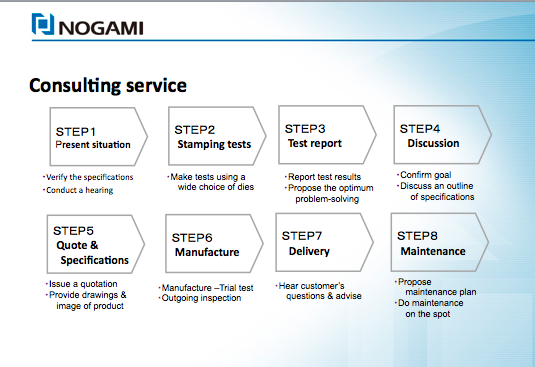 What it discovered as a new research material through this footwork was the aluminum used in positive electrodes in lithium-ion batteries. Flimsy aluminum was difficult to handle, and burs appeared right away. A new die researched and developed by Nogamigiken initially needed maintenance at a rate of once every 10,000 shots, but the company succeeded in extending that to once every 1 million shots. It has built a significant footing for export, has started some trading with American and German automakers, and has even been gathering attention from universities and research institutes.

In addition, the company wants to approach and propose solutions to businesses in diverse fields, including electric goods, semiconductors, and medical device manufacturers. In the future, the company plans to establish business tie-ups with overseas companies to create a local support system for providing maintenance at customer locations Automobiles, home appliances, electronic components While the things that are made change with the times, one thing that has always supported Japanese manufacturing and been a driving force behind the Made in Japan brand are dies. Where there is manufacturing, there are always dies. Ryota says, Even though dies are important, they tend to be taken lightly. I want to change that mindset. Using precision punching dies filled with its technical strength as weapons, Nogamigiken is determined to keep going forward, aspiring to be the top of a global niche market. 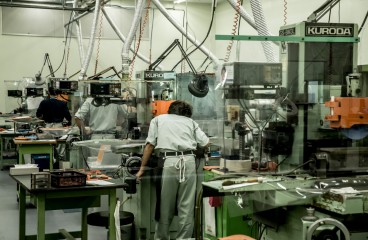