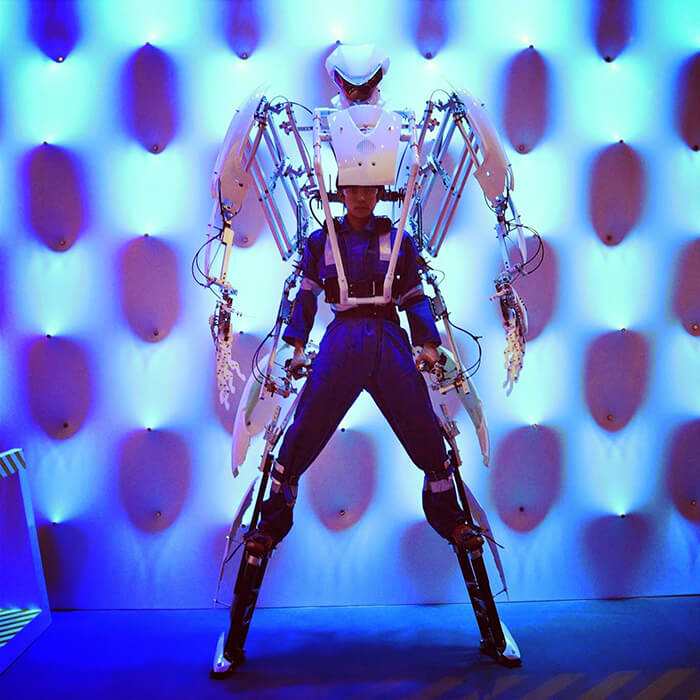 All eyes were fixed on six futuristic towering robotic figures at a special technology summit hosted by the Dubai government in February 2015. Dubai media were abuzz with the robots, as were local politicians and industry leaders. All the mucky mucks were clamoring to get a look at these towering giants at the unveiling.

The presentation began, “the Skeletonics robotic exoskeletons feature movable arms and legs controlled by an internal human operator.” There was a silence in the room as the audience didn’t seem to fathom what was just said. The emcee was strapped into one of the three meter tall Skeletonics robots and began moving the arms and legs and then started walking. Gasps and applause were heard from those assembled. The emcee effortlessly moving the robot, asked, “now who would like to be the first member of the Dubai public to ride one?” Pandemonium broke loose and the Skeletonics robots soon became de facto honorary citizens of Dubai and the ritzy gulf city’s hottest new trend!

It All Began with a Challenge

The story of Skeletonics wasn’t always one of razzle-dazzle and catering to the jet-set. Skeletonics started seven years at the National Technical University of Okinawa, a local college on the remote Japanese archipelago of Okinawa. Two students in the robotics department, Mr. Reyes Tatsuhiro Shiroku and Mr. Tomohiro Aka entered the 21st Annual Japan Robotics competition. The competition’s theme that year was “Innovation in Walking Technology”. The two decided to use link motor technology found in car windshields to create movable joints for robots, and took the top prize home from the competition. This win from these two young, unheard of, engineers sent shock waves throughout the robotics community. 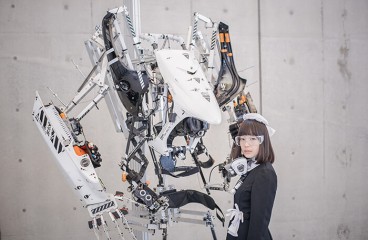 Today Mr. Shiroku is the company’s CEO and Mr. Aka its Chief Technological Officer (CFO). The two young engineers granted our magazine an interview in the company’s surreal Tokyo headquarters. The place takes a few minutes to get used to as you cross the line between reality and the fantasy world of Japanese animation and comic books. One has to maneuver between towering robotic structures set against a background of clean spaceship like interior design. It feels something like being in a James Bond movie filmed inside a space ship.

“We developed an exoskeleton with inspiration from the insect world,” said Mr. Aka. “Tatsuhiro and I decided to extend the human body by creating a fully versatile robotic exoskeleton and by creating fully movable robotic joints to correspond to each of the human joints,” he said, speaking softly and quickly, adding, “we set out to fully extend the human range of motion to the robotic exoskeleton.” Mr. Aka began to demonstrate on the model to the right of his desk, “each arm contains a complex network of link joints that allows the movement of the robotic exoskeleton to correspond accurately to the underlying human movement. The first models were fairly primitive compared to what we have today, however, even those models were easy to operate without the need for technical support.” 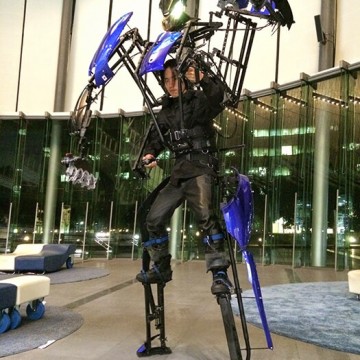 One of the most attractive benefits the towering robots give to consumers lies in its link motor technology, which can easily be operated without advanced technical knowledge. “One major issue in the field of consumer robotics,” explained Mr. Shiroku, “is that technical issues often arise in robots, and consumers have a hard time repairing them.” Mr. Shiroku said that in order to maintain and operate most robots an advanced knowledge of mechanical engineering and electrical skills is needed. “Our link motortechnology is resistant to malfunctions, but when problems do arise they are generally very easy to identify and simple to repair. In the Skeletonics robots, even the most intricate parts, are very difficult to break, so we are not hesitant to rent them out to adventure seekers.” It’s becoming a trend in Tokyo to rent Skeletonics robots out for cultural and leisure purposes.

Matthew Pitts is an American expert on Japanese pop culture based in the Tokyo area. Matt knows Japanese pop culture better than anyone. Protechnology Japan recently spoke with him to get a sense of how Japanese animated culture gave rise to this new trend in leisure robotics. He candidly said, “twenty years ago it was unpopular to talk openly about animation in Japan,” he said, adding, “the hardcore fans created their own unique underground society that became known as Otaku culture.” Matt explained that the Otaku culture became absorbed into the Japanese mainstream, adding, “then the Otakus pushed the envelope and began engaging in costume play, acting like their favorite characters, in public.” 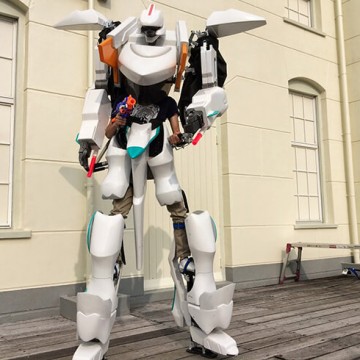 This costume play trend was at first shunned by the mainstream, but it was quickly adopted by Japanese society and became a high art. Skeletonics has now made it possible not only to role play characters in public, but to actually become robot like and interact with others with an extended sense of body. Matt, very excitedly said, “what’s happening now is that the Otaku culture is not only defining the Japanese mainstream, but its revolutionizing what’s possible for humanity,” he said, adding, “this has gone beyond play, by making the world of animation more and more real some of these fans are actually changing the nature of reality by actualizing ideas dreamed up in the minds of animators.” Matt said that he has been following Skeletonics for some time and finds them to be one of the most progressive companies leading this trend. 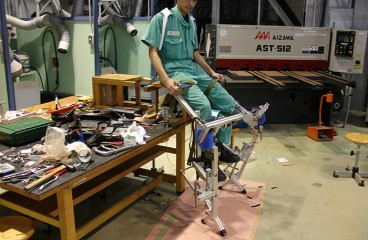 Skeletonics is fast becoming a household name in Japan as it has recently been featured on a number of TV shows and appeared in Japanese commercials. The company has also collaborated in a number of projects with performance artists. Skeletonics was the main stage act in one of Japan’s largest amusement parks in Nagasaki. The robots recently appeared on American ABC television where they were described as revolutionizing the entertainment industry. The company was featured at this year’s South by Southwest Festival in Austin, Texas. The annual Austin gathering has become the tech world’s premier event of the year.

Skeletonics robots are available at some amusement parks in Japan as permanent attractions, allowing many people to experience the technology. “Soo cool! I can’t believe how light I felt,” exclaimed Fumiko Iwamoto, after a recent Skeletonics test run in Tokyo. “My experience was that Skeletonics actually changed my brain in that I began to think different. The actual robot makes your body feel light, so you can think more freely,” said the twenty-five year old accountant from Tokyo. Ms. Iwamoto continued, “I wish I had my own Skeletonics, as I feel it would stimulate my creativity.”

At Skeletonics, the Definition of Success is to Constantly be Innovating

Skeletonics is definitely a hot company to watch. They recently won the prestigious good design award among others. What’s exciting about them is that they are always innovating and planning on blowing their last technology away with a better one Mr. Aka explained, “Skeletonics is currently in the fifth generation of exoskeleton models,” he explained, “with each generation we have had a great number of improvements.” Originally people could only operate the robot for about five minutes or so, now you can be inside one of these giants for over an hour. 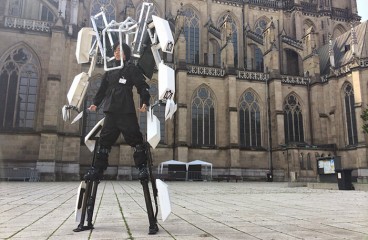 Mr. Shiroku swiveled around in his chair, turned his eyes to the celling and scanned the room for a few moments, and then with a quick burst of energy said, “I’m going to reveal this information exclusively to Protechnology Japan. I believe in you guys and in the work you’re doing with SMEs,” he smiled, “you’re a startup and we were only a startup a few years ago.” Protechnology Japan is privileged to have CEO’s like Mr. Shiroku sharing exclusive information for our readers. “We’re working on something called Eguzonics. This will be a completely new type of machine, though it will look like a giant robot exoskeleton, but it will more accurately reflect human motion and will have much more strength then the current models.

The Skeletonics robots basically move like humans, yet there is still some difference between the exoskeleton’s movement and the underlying human because of the size and form of the robot. The Eugzonics robots will feature technology that reduces the current difference in movement. Also because the Skeletonics robots lack motorized parts are not able to accurately reflect, let alone enhance, human strength. Mr. Aka, explained “the Eguzonics will contain motorized parts and will be much easier to operate and will allow riders to pick up heavy objects.” The Eguzonics is also promised to be lightweight and as user friendly as the current robots. “These robots come from the world of Japanese animation, and our ideal is to create robots that can do all of the things the animated robots do,” said Mr. Shiroku with a huge grin on his face, “we think that Eguzonics will the ideal robot.” The CEO could not tell us any more information, but assured us that Protechnology Japan would be invited to the unveiling of Eguzonics, scheduled for spring 2016. 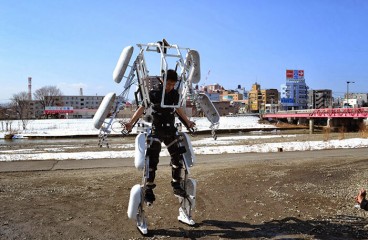 Mr. Shiroku explained, “my partner and I started this project by creating robots that we wanted to ride,” adding, “and we are still working on creating the perfect toys to ride. As we create better robots, the possibility for these robots to become useful outside of the world of entertainment increases exponentially. Once we are finished with the Eguzonics, this company may be working with new and diverse industries or we as a company may choose to work on something entirely different.” What’s important to Mr. Shiroku is that he gets it out there and keeps on working on what’s interesting.

Underlying all of the work, according to the two young engineers, is simply a desire to create. Mr. Aka said, “we just want to continue making high quality products with the intention to create products that both benefit society and contribute to positive technological transformations.” Many scientists created products not knowing what technological advances they would give birth to. They did their work in their labs and in their workshops simply following their desire to create and were joyful in the act of creating. Mr. Shiroku and Mr. Aka both dream about how their products may be used in the future, but what the future holds they both cannot say for sure. No matter what the future holds these two engineers will continuing making things they want to make because they love the process of creating. 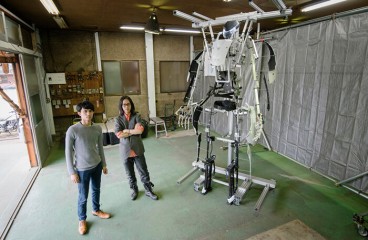