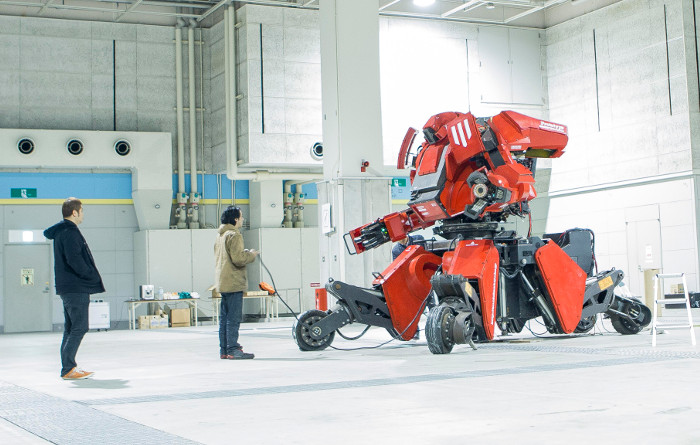 Giant robots has been a long-standing anime dream, especially in Japan, and Korogo Kurata built Kuratas, 3.8m tall, four wheeled leg robot wighting over 5 tons, to fulfill that dream. And as an extension of this project, Suidobashi Heave Industry is working on mass producing these giant robots.

In year 2012, Kurata finally completed constructing the world’s first humanoid robot, KURATAS. It took him two and a half years to complete.

“I have been inspired by anime and wanted to bring those giant robots into real world,” says Kurata. KURATAS is a robot that one can ride. One can ride inside the cockpit, equipped with monitors, and shoot bullets. KURATAS is armed with Gatling gun and Lohas Launcher, just like the robots in anime shows, where they battle against the bad guys. Of course, these guns are fake and are only a part of the design, but it looks as though it have just come out of the anime world.

And we came to as far to seeing these giant robots being on sale on Amazon. Within a week, they were receiving tens of orders to purchase it. They clearly made history, making our dreams come true.

It all started in 2004 when Kurata created a life-sized Scopedog, anthropomorphic robot in Armored Trooper Votoms, a Japanese anime series screened in 1983 to 1984. And after completing them, he realized how big and scary these robots could be. “In anime, four-meter tall robots do not look scary at all, but in real life, seeing these four meter big robots move, it was quite thrilling and at the same time, even terrifying”. He came to wonder how people will react if he created a ridable robot, four meters tall.

He had a desire to build such a robot, however, Kurata was not an engineer nor a mechanic. He did not have the knowledge nor skill to build such a piloted robot. However, in 2009, Kurata was asked to develop a machine that could kick a soccer ball a a speed of 300km/h by BP Castrol for 2010 FIFA World Cup in South Africa. That was a turning point for Kurata, as he acquired the knowledge of hydraulic drive technologies.

“Hydraulic cylinders were just the right answer I was looking for” he says. “I could make robots. I just needed the technology to drive and operate them. Now that I have acquired hydraulic drive, I could finally make these robots move!”

KURATAS was manufactured by Suidobashi Heavy Industry along with the help of an engineer, Wataru Yoshizaki. Suidobashi Heavy Industry is a group of technical experts, who came together to assist Kurata to mass-produce the robots and promote them globally. Thanks to all of their help, KURATAS has received a worldwide attention with number of inquiries to purchase it  at a forecast price of over 100 million yen.

“Imagine all of these robots moving. Science fiction anime becoming real. With Suidobashi Heavy Industry, a group of top-notch production capabilities, I can ensure to provide piloted humanoid robots that can fulfill every man’s dream.”

Piloted giant robots are not anymore a fantasy nor anime heroes. You too, can become a hero. Hope into the cockpit and operate these robots yourselves! 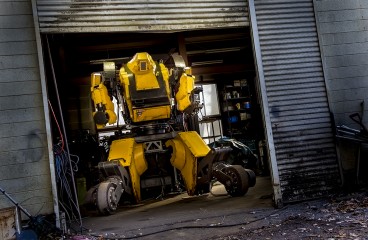