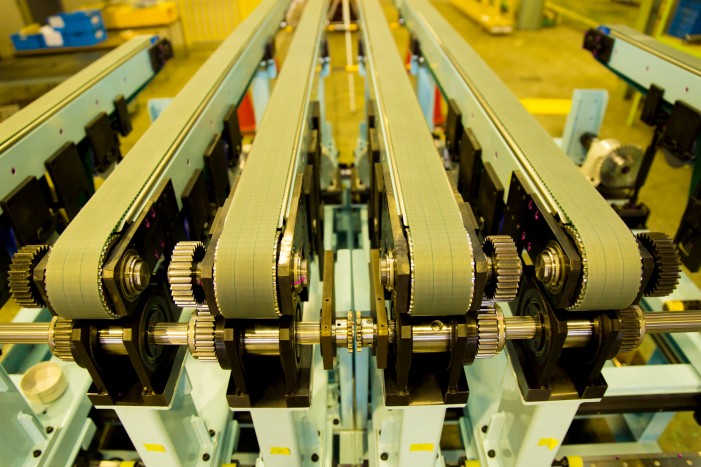 Plus / minus 1mm. That’s the level of precision Shimano’s belt conveyors are expected to operate at for an automated production line of an automotive manufacturer. Their conveyor belts are not just a delivery system that connects production units, they quickly transport the processed products from one unit to the next, delivering them to the exact location in a highly precise manner. Because of the high precision, they are often used alongside industrial robots. Some of their fastest belts clock in at 120m per minute, which are great for large-scale factories overseas.

Their conveyor belts boast three strong points. One is the ability to stop precisely as mentioned above. Conveyor belts by other companies often stop in the general area that they need to transport goods to. But Shimano’s conveyors measure the servo motors and belts directly to stop at the set location with only plus or minus 1mm margin of error. For production lines where stopping locations of the conveyors are essential, their products are second to none. Second, they can manufacture larger belts, up to 4 x 16.5m, while retaining the same precision.

They sell six of their products to auto-makers a year, and aircraft manufacturers have been ordering from them recently as well. The third one is the speed. While many conventional conveyors transport at a speed of 6m to 12m per minute, their conveyors that are designed for speedy transport can deliver goods at a whopping 120m per minute. Their conveyors have been helping many production lines at large factories overseas speed up the process. They also offer stocking conveyors and other types of products that utilize their advanced technology.

All information is shared between the design engineers and the workers.

How do they continue making products that are so high in quality, you may ask? We asked the president, Hiroyuki Shimano, that question. “Because we have a holistic approach from the design to the manufacturing, and because the design engineer and the workers that manufacture it understand everything clearly. We especially take time educating our factory workers. We constantly teach them about designs and basic mechanism, and make sure their individual skill level continues to rise.

So, it is possible for a factory worker to spot a small mistake in the design. Something like, “This part is supposed to take this much load, is this strong enough?” for example. Whatever opinion the workers might have, we take it straight back to the designers. I believe that is one of the reasons why we can reduce the possibility of finding something wrong with it after its completion.”

Thinking ahead and avoiding possible accidents: The reason why Japanese products are praised.

And there is another reason why their products are highly praised, Shimano thinks. “It is the attention to detail that the Japanese are good at. For example, the designer meets with the client many times to sort out the details, and even if it wasn’t mentioned in the meeting, the designer will often go the extra mile and do things that the client will likely appreciate. When they are building a new factory, we’d look at the blueprint first. If we know our conveyor will be placed in the forklift’s path, we will reinforce the section that might get bumped and damaged.

Or, if it’s going to be installed in a place where workers might lose balance, we’ll add a handle on it. Because we put ourselves in the factory workers’ shoes and think from their perspective, and are not reluctant to do things that were not in the original plan, we are able to make products that do not malfunction or break easily.” People may not notice these little things if the products don’t actually break. Plus, things like this happen: “One time, a client told us ‘your conveyor often stops working. Please make a stronger conveyor.’

We went to the factory, but the conveyor looked fine. But when we observed how they used it, we realized why it broke so easily. The workers were walking or working on top of it. It doesn’t matter that it says ‘Please don’t get on top of the conveyor’ in the manual, if people thought it would be more efficient to get on it, they would. So, we should have thought ahead and made the conveyor durable enough so that people can walk on it. You might say that’s over-doing it a little, but I believe that’s the magic of Made-In-Japan products and why our products are trusted.”

Currently, they are also developing products for clients in America, China and Southeast Asia through trading companies. “There are still many factories in the world where products between lines are delivered by hand. Our products are not just a device built on theory and calculated durability. We custom-make everything to suit the client’s desires, and we want factories around the world to try us out” says Mr. Shimano. They are confidently taking their Japanese-quality products to the world. 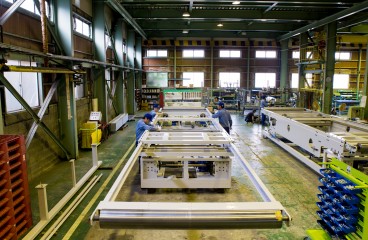