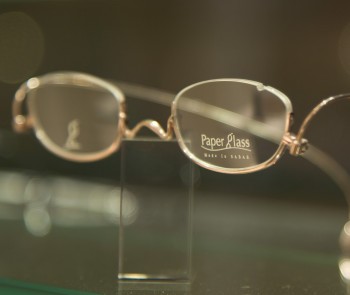 Paperglass are next-generation reading glasses that are ultra-thin at 2mm and have a lightweight, stylishly designed frame. Developed by Nishimura Precision, this item has become a sensational hit product in Japan. In an unusual move for a small/medium-sized company, Paperglass has opened “Paperglass FUKUI”, a retail shop that displays the glasses and allows customers to try them on before purchasing. A maverick in the eyewear industry, Paperglass is now taking on the world market.

Moving from a career in IT to restarting the family business

Paperglass president Akihiro Nishimura was born and raised in Sabae, a town in Fukui Prefecture that is considered one of the three great eyeglass production regions in the world. His parents operated a business as manufacturers of eyewear components. As the second-born son, Nishimura did not have the traditional obligation to carry on the family business, so he went to work at an IT company in Tokyo after graduating from college. However, his father came to visit him from home a year into his career, and gave him the news that the family business was in dire straits and asked Nishimura to return. It was the first time Nishimura had ever had his father beg him for something with a bowed head, and he decided to return to his hometown. The reason for the predicament was that one after another, manufacturers were moving their production facilities to China.

Seeing that the eyewear business was shifting to China, Nishimura believed that the family business would have to branch out in another direction. As he saw himself as a salesperson, Nishimura aimed to draw in new business by using his experience in the IT sector. He launched a B2B site specializing in precision metalwork. There were few B2B companies online at the time, let alone in the metalworking field, and he was given the cold shoulder by those in the eyewear industry. However, Nishimura was persistent and continued to push the company’s strengths in titanium machining, and little by little, they started to receive online orders from other industries, allowing them to slowly rebuild their balance books. However, this success only served to cause those around them to become envious, and the company faced a sudden drop in subcontracting work for eyewear, which was their primary business. “This just fired me up more. I resolved to bring in even more business and prove our competitors wrong,” recalls Nishimura.

Because the business of an SME is largely determined by the volume of subcontracted work taken on, it had long been a goal of the company to develop a finished downstream product that would free them from this concern. Nishimura says, “At the end of the day, as a company from a town based on eyewear, we wanted that killer product to be eyeglasses.” At the time, reading glasses had a somewhat cheap image attached to them, and little emphasis was placed on aesthetics or design. There were virtually no well-designed reading glasses. Even the wealthy and luxuriously dressed wore unattractive reading glasses, and prices rarely exceeded a few thousand yen. Nishimura realized intuitively that there was a business opportunity here if he could only get rid of the negative image that associated reading glasses with the elderly. He set out to create a pair of glasses that could truly be called stylish. However, Nishimura also felt that with so many items vying for consumers’ attention, it was not enough for the product to be merely “good”; it would also come down to how they made that message heard through marketing.

Carving out online sales channels, Paperglass sweeps away any preconceptions about what reading glasses should be 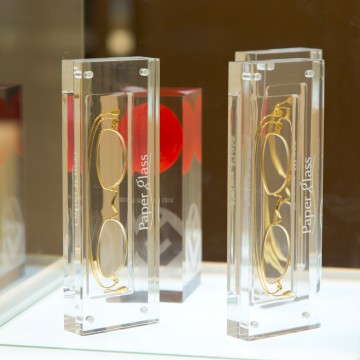 What Paperglass designed is a pair of readers that, by redesigning the joints between the frame and earpieces, allows for an ultra-thin shape that is just 2mm thick and lies flat when folded. In 2010, the product was ready for sale, but the company opted to sell it directly off its website instead of through the usual channels. “Working directly with customers lets you determine what they need, as well as offer the item at a reasonable price,” says Nishimura while describing the lessons he learned when working in the metalworking B2B field. Nishimura Precision also boldly set the price upwards of ¥10,000. This decision is a testament to the company’s commitment to breaking down the stereotype of cheap readers. Nishimura’s peers criticized this move, saying the glasses would never sell. “However, I was more than confident; I had conviction. I truly believed that this product was worth the asking price.” After the glasses gained a reputation for their comfort, aesthetics, durability, and other factors, they started to sell.

The glasses are a resounding success after receiving the Good Design Award, with its popularity such that waiting lists are now required.

Nishimura’s next step was applying for the Good Design Award. The thin profile of the frame drew a good deal of attention, and the glasses took home that prize’s Special Award in 2013. In 2014, as part of the Japanese government’s Cool Japan project, Nishimura was invited to exhibit the glasses at a trade show in Milan, Italy. The response in Italy exceeded their expectations, and the praise given the glasses in Italy was widely reported in Japan’s major newspapers, causing Paperglass sales to explode in Japan. In turn, this popularity generated more popularity, and the glasses are now available at sixty retailers across Japan, with a wait time of approximately three months. Additionally, Nishimura Precision has entered into distributorship agreements with vendors in five countries overseas.

The reading glasses that introduced a new concept are now moving from Japan to the world. 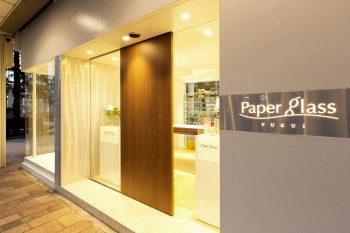 “Readers and bifocals had a negative image attached to them,” said Nishimura, “but by simply holding the Paperglass frames in your hand, that image is entirely changed, with the effect rippling to those around you. I believe this is the true value that Paperglass offers as a product.” The success of the product has simultaneously upended the industry’s preconceptions that reading glasses priced at over JPY10,000 would never sell, and that the costs would be too high to turn a profit if manufactured in Japan. This has also had a ripple effect on the eyewear manufacturing industry in Sabae. Going forward, Nishimura is hoping to establish itself as a Japanese brand that people love and want for their image and look, moving beyond the utility factor. That next step will be through direct points of sale overseas. In 2015, the company plans to open several shops abroad, with the goal of securing stable sales channels in Europe, the Americas, Asia, and the Middle East within three years. 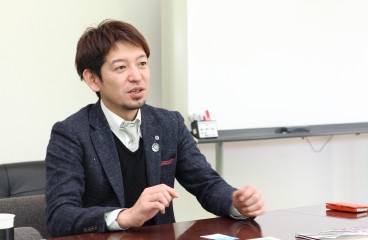