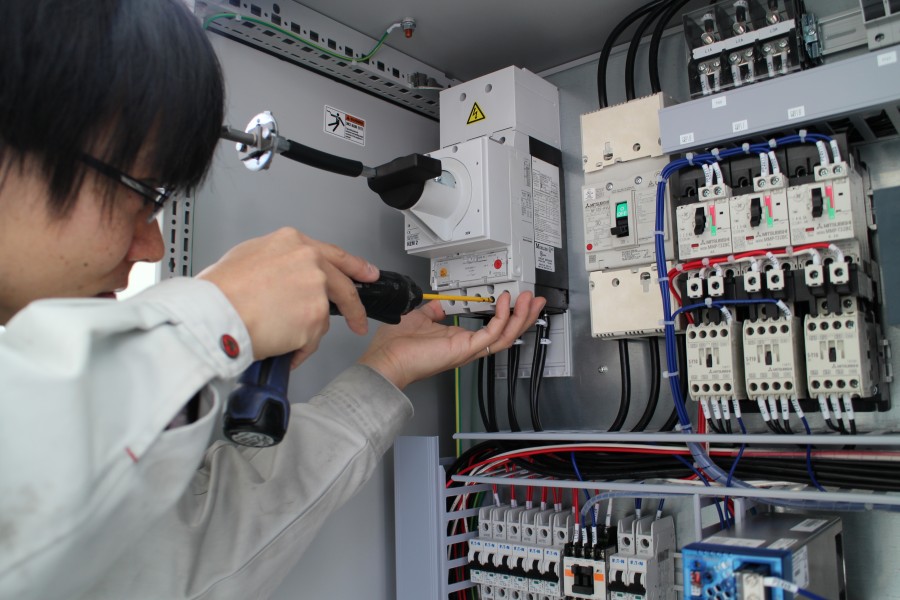 A control panel is something that is always installed where electricity is involved and used without regard. All monitoring of and commands given to automobile manufacturing machines, for example, go through a control panel. The control panel is like the brains of a machine; without it, a machine would just be a mass of iron. Control panels control the machines found in every corner of modern society. However, when shipping control panels to foreign markets, standards different from those used at home need to be cleared, since the situations and standards for electricity are different in each region. In other words, control panels have to be manufactured according to each region’s unique standards. In such a cumbersome and complicated control panel industry, one company that boasts an unusually wide playing field is Mikasa Electrician Department.

Covering 130 Countries and Regions: An Electrical Specialist Group with a Full Command of Diverse Standards

While the company is small, with only 25 employees, they have broad reach. Normally, panel manufacturers specialize in the standards of their own country. Mikasa, on the other hand, started to reinvent itself 10 years ago and has been actively working at designing and producing control panels with foreign standards. Today, it covers the standards of a wide swath of the globe, including the IEC international standard, Europe’s EN standard, and North America’s NFPA and UL standards. It is particularly worth noting that Mikasa is one of only about 15 companies in Japan that have been certified as a manufacturer of industrial control panels under the UL 508A standard. At present, larger firms and other companies that make mass-produced items account for the majority of certified plants in Japan. Entities such as Mikasa Electrician Department that count single item users with individual product needs among their customers are an extremely rare and precious case. However, major companies in North America often give this standard as a condition of purchasing and, depending on the state, it has compelling force when certification is an essential requirement. Consequentially, Mikasa has a great advantage over other, non-certified plants.

Furthermore, Mikasa has established a local plant in China and has formed business alliances with companies around the world, including in Germany, Italy, the US, Korea, and Taiwan. As it expands its global network and accumulates knowhow related to foreign standards, Mikasa has been gathering attention from Japanese companies with their sights set on overseas expansion. Last year, approximately 70% of the orders it took were for products bound for export. Shigeki Ishida, the company’s president, says: “We handle a wide variety of control panels, ranging from one offs to mass produced items. We mainly produce control panels for machinery and equipment manufacturers in Japan. These companies are expected to accelerate their overseas expansion, and we in the control panel industry need to be able to design and produce products that are compliant with overseas standards. However, even though I say “overseas” as if it were one thing, customer locations are wide-ranging, including the West and ASEAN, and so the electrical standards have to conform to each destination. Right now there are several thousand control panel manufacturers in Japan, but none that can handle a lot of standards like we can, and so they tend to be beleaguered by hurdles in making shipments. Even if you look all over the world, you probably would not be able to find a company that has comparable breadth of coverage to us. Of course, consulting companies and major trading firms have panoramic knowledge, but they lack understanding of the nitty-gritty of electrical matters, and their costs are enormous. While Mikasa is a small company, we provide drafts, proposals, and planning tailored to each customer based on our store of knowhow and take pride as a control panel specialist in supporting the expansion of Japanese machinery and equipment manufacturers into 130 countries and regions. Furthermore, with business partners in each region, we deliver even more optimal service in terms of both hardware and software, including the provision of programs for foreign-made control units.”

On the other hand, in recent years Mikasa has been receiving more and more inquires from foreign companies looking to enter the Japanese market and expects this trend to expand in the future. Although up to international standards, the electrical situation in the Japanese market is so unique that it bears resemblance to the way in which different species evolved in isolation on the Galapagos Islands. The company often hears that when foreign firms try to get into the Japanese market they face an uphill battle, not knowing the market characteristics and marketing approaches. The height of the threshold for entry into the Japanese market is also obvious from the fact that when Mikasa Electrician Department exhibits at exhibitions in and outside Japan, it receives a lot of inquiries about Japanese standards. And it is in just such a situation that Mikasa can demonstrate its real worth. For, having spent so much time dealing with machinery, equipment, and electrical parts for a wide variety of industries under standards suited to customer needs, Mikasa also has the ability to modify the specifications of foreign products to meet the regulations of the Japanese market. Inquiries from Europe come especially from Germany, and the company says that it has already entered into contracts with several major firms.

Germany-based E-T-A, for example, is an electrical parts manufacturer that boasts a huge 60–80% share of the European market. When it first forayed into Japan its sales figures did not grow as expected, and so it visited Mikasa’s head office seeking help. The measure Mikasa took was to make demo machines built with E-T-A’s products and display them at exhibitions in Japan, including JIMTOF. It also held seminars around the country, produced handbooks highlighting the effectiveness of E-T-A’s products, and launched a sales website as part of an aggressive promotion push. While Mikasa’s marketing efforts were counted as only a part of E-T-A’s sales promotion project, they ultimately succeeded in driving sales up to several times the original figure and helped E-T-A expand its share in the Far East.

Recently, Mikasa concluded a contract with EPLAN, a German control panel CAD manufacturer with a 70% share of the European market, and is planning the same kind of promotion as described above. In this project, Mikasa also plans to support the sales promotion of EPLAN’s design system in Japan by incorporating a system to monetize information obtained through Mikasa’s online direct marketing.  Moreover, cooperation with our business partners in each region has boosted our ability to offer programming of foreign-made programmable logic controllers (PLCs). Plus, we have made arrangements for our business partners to provide maintenance and other after-sales services after products have been shipped overseas, in order to ensure that our customers can receive the same full-scale services as in Japan.

A Small Giant with 200,000 Potential Customers

What makes it possible for a small control panel manufacturer in Aichi, Japan to do business alongside European business giants? The secret lies in Miaksa’s ability to provide drafts, proposals, and planning, and in the pull-based business style that has kept it in the lead.

The image of an old plant with triangular, slate roofs and concrete floors is usually what comes up when people in Japan think of a control panel manufacturer. But Mikasa’s head office has a showroom displaying control panel demo machines containing foreign electrical parts. The atmosphere is like that of a distributor for luxury foreign cars. Furthermore, Mikasa runs 13 kinds of websites, including seigyobann.com (“seigyobann” is equivalent to “control panel” in English), publishes handbooks, and holds seminars across the country. It makes aggressive efforts to disseminate information. “People [in Japan] are often told to work twice as hard as others, but if you work 13 times harder than others, you can gather that much more information and differentiate yourself from the competition,” Ishida says with a laugh. The information held by Mikasa is unbeatable and is one of the company’s solid strong points.

Today, it is as if Mikasa Electrician Department has a conductive wire that brings in inquiries about control panels every day through the Web and word of mouth. The outcome of having put together and closely examined this information is that Mikasa now has a list of 200,000 customers. This potential and the company’s knowledge of a wide range of standards are decisive factors that bring in references from numerous foreign companies.

(The next issue will introduce the one-stop service that underpins Mikasa Electrician Department as well as the company’s after‐sales service in and outside Japan.) 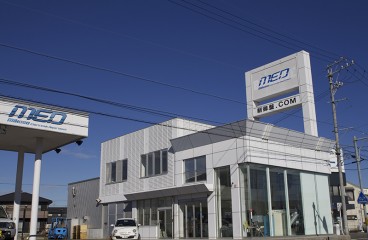